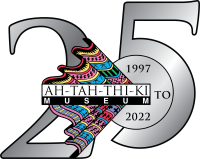 BIG CYPRESS RESERVATION, Fla. (August 11, 2022) – The Seminole Tribe of Florida’s Ah-Tah-Thi-Ki Museum will celebrate its 25th Anniversary on Sunday, August 21.
There will be free admission all day in honor of the anniversary, and the museum will be discounting annual memberships 25% until November 5, 2022. Additional promotions will be announced between now and the museum’s American Indian Arts Celebration, set for November 4-5.

In 1997, the Seminole Tribe of Florida built the Ah-Tah-Thi-Ki Museum. It opened on the 40th anniversary of Federal Recognition of the Seminole Tribe. Ah-Tah-Thi-Ki means a “place to learn and a place to remember.” The museum is a community place of cultural preservation and plays an important role in communicating the Seminole story to people who visit Big Cypress Seminole Indian Reservation from cities and countries across the globe.

Today, with the internet and social media, the Seminole story is being recognized worldwide. The legacy of Billy L. Cypress, the first director of the Ah-Tah-Thi-Ki Museum, continues today through the hard work and dedication of the museum’s team. Director Gordon “Ollie” Wareham welcomes everyone to come celebrate this great milestone: A Place to Remember, A Place to Learn. Respect, Celebrate & Preserve Seminole Culture & History.