Originally conceived in 1989, the Ah-Tah-Thi-Ki Museum opened its doors to the public on August 21, 1997 helping to commemorate the 40th anniversary of federal recognition of the Seminole Tribe of Florida. The Ah-Tah-Thi-Ki Museum is located on the Big Cypress Seminole Indian Reservation and in May 2005, the Museum program opened a smaller satellite facility within the Seminole Paradise area of the Seminole Hard Rock Hotel and Casino in Hollywood. The Hollywood location closed in early October 2009.

The former Executive Director was Billy L. Cypress, a member of the Seminole Tribe of Florida, and a member of the Bear Clan. Mr. Cypress was a veteran of the U.S. Army, and a college graduate with a master's degree in English, and post-graduate work in History. Mr. Cypress served on numerous museum planning and advisory boards including the Smithsonian’s National Museum of the American Indian (NMAI).

In August of 2004, with the passing of Billy L.Cypress earlier in the year, Tina M. Osceola became Executive Director and held that position until June 2011. Also a Seminole Tribal member, Tina grew up in Naples and was an avid Native American dancer and entertainer. Tina holds a bachelor’s degree in Political Science from Rollins College and a master’s degree in Public Administration from Nova Southeastern University. Ms. Osceola also held a seat on the Board of the NMAI and served as President of the Board
for the American Indian and Alaska Native Tourism Association (AIANTA). From of 2006 through 2013, the Ah-Tah-Thi-Ki Seminole Indian Museum was managed by Director, Anne McCudden and Dr. Paul Backhouse from 2013-2019. Kate Macuen was the Director from 2019-2021. The Museum's current Director is Gordon "Ollie" Wareham, nephew of the late Billy L. Cypress.

In 2004, the Big Cypress facility added a second building which is used for curatorial purposes. This structure is dedicated to the Museum's curatorial and conservation needs and contains a conservation lab and state-of-the-art collections vault. Some of the Museum artifacts on display are on loan from the Smithsonian Institution. The Museum also actively shares its collection with select community institutions in the form of traveling exhibits and artifact loans.

The Ah-Tah-Thi-Ki Museum boasts more than one mile of elevated boardwalk through a 66 acre cypress dome, all wheel chair accessible. The boardwalk offers educational placards in English, as well as the two languages of the Seminole (Mikasuki and Creek), identifying 67 different plant species and their traditional Tribal uses. Additional signage highlights many native species of wildlife one might encounter in the Everglades. The boardwalk leads to a recreated Living Village wherein Tribal artisans demonstrate the traditional arts and crafts of woodcarving, beadwork, basketry and the distinctive Seminole patchwork.

The years have passed quickly since we opened our doors, but we haven’t forgotten the tireless efforts and dedication of the numerous visionaries comprised of Tribal leaders, Tribal citizens, Museum staff and visitors who have provided the opportunity to live by our very definition… a place to learn, a place to remember.

In April of 2009, the Ah-Tah-Thi-Ki Seminole Indian Museum was awarded full accreditation from the American Alliance of Museums (AAM). This designation is largely significant in that the Ah-Tah-Thi-Ki is the first tribally-governed museum to have received accreditation. This mark of distinction is based upon the AAM “Characteristics of Excellence” core standards. Our highly accomplished team offers a unique blend of technical disciplines and specialized knowledge. 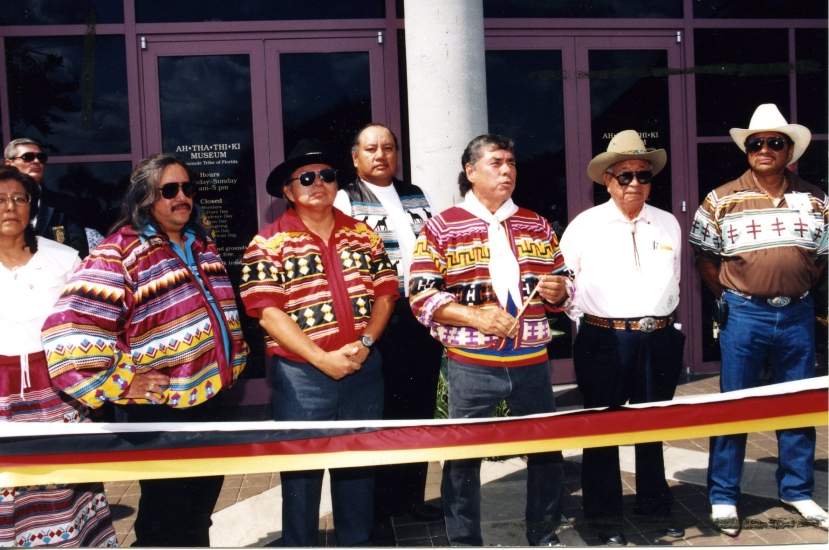 We have lost priceless knowledge of our people because we failed to properly document and store these documents. Therefore, I believe it is time to develop a museum where we can do these things and share our culture with those who wish to know a little about the Seminole.