The word Seminole now refers to four distinct groups in the United States. Three of those groups reside in the boundaries of the state of Florida. The Seminole Tribe of Florida was federally recognized as a tribe in 1957. The Ah-Tah-Thi-Ki Museum resides on one of their reservations. In 1963, the Miccosukee Tribe of Florida was federally recognized; they are named for one of the two Seminole languages: Mikasuki. Then there are the Independent Seminoles, who refuse any recognition, land, or help from the federal government, choosing a more traditional lifestyle. Finally there is the Seminole Nation of Oklahoma. All of these groups create and wear patchwork and consider it a signifier of their identity as Seminole. In this exhibition, the term Seminole refers to all four groups, although it is primarily focused on the Seminoles in Florida. 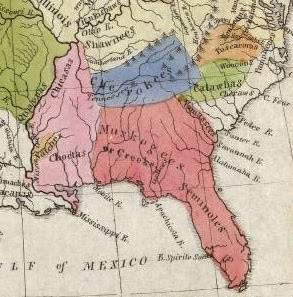